Has anyone ever come up to you and said, “Would you like a little feedback?”

As a speaker, it happens to me with some regularity. And my knee-jerk, unfiltered, slightly exaggerated response is always the same.

Luckily, I only say this in my head and not out loud. But my reaction is based on a common experience. Very few people have ever asked me that question and then proceeded to give me so much positive feedback that I burst with joy. Instead, it’s always feedback, disguised as helpful service, that feels like dagger-through-the heart criticism. But perhaps I’m overreacting. 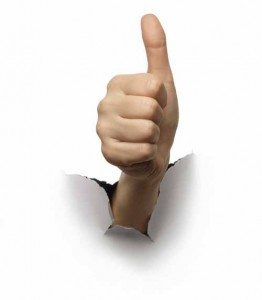 As a former social worker who was trained as a therapist, I know that feedback can be a useful tool for our work and our personal lives. It’s especially helpful for those blind spots that prevent us from seeing the impact of our behavior. The problem is, most of us would prefer that our spots stay blind. Plus, the people giving us the feedback are typically not very good at providing balanced constructive comments.

Recently, I gave a presentation and a more experienced speaker who was in the audience came up to me afterwards and gave me several compliments about both my content and my style. Then, he said, “If you are interested in more thorough feedback, I will be happy to send you some. If not, no problem.”

While I felt my knee starting to jerk, I decided to take him up on his offer and was pleasantly surprised with his response. He sent me a two-page typed report. First, he listed ten things that he felt I did very well and then, at the bottom of the page, he wrote, “If you’re happy with your program and don’t want to change anything, stop here. If you’d like to see how you can be even better, read on.”

Of course, I read on and was glad I did. He offered me ten specific ways I could improve my technique. I adopted several of his suggestions and they made a big difference.

So why was his feedback so much better than the others’ I have received? If you want to know, read on!

Stroke-Kick. This is a phrase I learned in graduate school. It’s shorthand for offering the positives before negatives. If all we hear is negative, we tend to tune out everything or simply get defensive. However, if someone acknowledges what we do well, it builds our self confidence and allows us to hear the constructive comments less defensively.

Offer Specific Strokes and Kicks. My friend David Glickman, when teaching about humor, says, “The more specific, the more terrific.” The same is true for feedback. The key to this stroke-kick approach is that the feedback must be specific and not too general. If someone says, “Great job,” it can sound vague and not that helpful. But if someone says, “I really liked the way you organized your report at the meeting yesterday,” it gives more information to work with.

Make the Specifics Behavioral. Commenting on someone’s personality is not as effective as commenting on their behavior. If you’re not their therapist, you should stick to the behavioral specifics. So, “You’re offensive” will not be helpful to anyone. However, saying “The sexual joke you told yesterday made me uncomfortable because I’m not fond of hearing jokes like that” addresses a behavior rather than a personality trait.

Own the Feedback and Don’t Generalize. Unless we’ve conducted a Gallup poll, we can’t speak for anyone else but ourselves.  So when we offer feedback, we should not imply that we are speaking for others. A comment such as “When you walked away abruptly yesterday, I felt that you were ignoring me” is much more likely to be heard than, “Everybody this side of the Mississippi thinks you’re a jerk!”

Feedback is not always comfortable but if it’s done correctly, it can be very helpful. That being said, if you have feedback on this article, just keep it to yourself.