I once wrote a funny line for the CEO of a non-profit hospice. He was kicking off a black-tie fundraiser and said, “We are a non-profit organization. We didn’t start out that way but that’s how it ended up. We need your donations tonight.”

It got a good laugh…and quite a few donations!

In the world of business, however, when someone says they are “giving it away”, we often make the assumption that they’re either leaving money on the table or they’re offering something for free in hopes of getting business later. But wouldn’t it be great if we just gave it away more often, and on purpose? 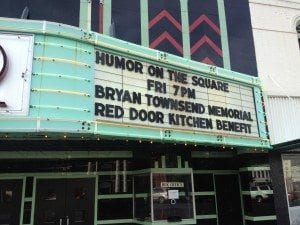 Last week, I had the opportunity to give away a bit of humor for a very good cause. The event was a fundraiser for a colleague who died a few months earlier and it was one of the coolest events I’ve ever been a part of.

Bryan Townsend was a funny, insightful, and inspiring speaker who spoke to thousands of audiences all over the country. He once said, “I tell people I’m a humorist when they laugh – if they don ‘t laugh, I tell them I’m a motivational speaker!”

Bryan was a great businessman who had also been inducted into the National Speakers Association Hall of Fame. By all accounts, he was very successful. However, his work off of the speaking platform was perhaps even more successful because he spent most of his life giving it away.

Bryan was the epitome of a dedicated volunteer. He was an active participant in Carpenters for Christ, an organization that helps build churches, the Red Door Kitchen, a food pantry that serves over 3000 meals per month to the needy, and the founder of the Whosoever Will Men’s Bible Class at First Baptist Church in Talladega, Alabama which is a ministry to men from all walks of life.

When Bryan died, some people stood in line for two and a half hours at his funeral just to greet the family and tell them what Bryan had meant to them. Bryan touched many lives through his volunteerism. And what’s even more poignant is that Bryan’s volunteerism has led others to volunteer as well.

On June 28, 2013, I and six other speakers from the Platform Professionals, a group of speakers in which Bryan belonged, performed music and humor at the historic Ritz Theater in Talladega as a memorial tribute to Bryan – and as a fundraiser for the Red Door Kitchen, a cause that was very dear to Bryan.

The evening was a great success with a sold-out crowd of 500 people. The event raised $10,000 for the Red Door Kitchen so they can continue their mission of serving food to those who need a meal.

But what was most meaningful to me, other than being a part of a stellar group of speakers, is that Bryan’s influence on us eventually led to our influence on others. He gave away his time and talents so that we could give away our time and talents so that ultimately the Red Door Kitchen could continue to give away something valuable to those in need.

We live in a country where success is often measured by money or power but not often by what we give away. Yet, Bryan, while very successful, had a greater impact through what he gave away.

If you give away one hour of volunteer service per week, you would have the opportunity to have an impact on others 52 times per year. Imagine how that might look. Winston Churchill said,“We make a living by what we do, but we make a life by what we give.”

Bryan Townsend made a life by what he did. He gave away his time and talent on purpose. And as a result, his life is still having an impact today.

Perhaps it is the right thing to give away our time, our talents, and our resources more often and on purpose. To me, that’s what Doing It Well means.

So, what can you give away?