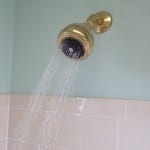 So, what is it about the shower that brings out the best in me?I’m not suggesting that my naked body is the best in me.  I’m talking about the way my mind works when I’m in the shower.  There’s something magical that allows great ideas to flow as freely as the water.  In fact, that’s where I got the idea for this blog.  See?  Both magical and brilliant.

I do know that our brains are freed to be creative when we focus on something else.  For instance, when we’re driving, we focus one part of our mind on the road thus allowing another part of our mind to relax and think of other things.  It’s as if we’re in a meditative state without all the clutter and self doubt that usually occupies our thoughts.  I suspect the same is true when we’re in the shower since we’re focused on lathering and rinsing rather than on whether we’re lathering and rinsing correctly.

The sensation of hot water hitting our body also has a relaxing effect.  I could stand for hours under a hot shower – if it wasn’t for the wrinkling.

But there is something else.  Psychologically, we can’t get much more vulnerable than in the shower.  Look no further than the movie Psycho to understand both the physical and psychological vulnerability of standing naked behind a shower curtain.

Perhaps it’s this combination of the soothing sound, the warm stimulation, and the metaphorical shedding of those things that hinder us that allows our mind to freely imagine the possibilities of new ideas.

This morning, while showering, I had several incredible ideas.  I was so charged up, I forgot to rinse the shampoo from the traces of hair left on my head.

But then, once I got dressed and sat down at my desk to consider the implementation of my fantastic brilliance, I heard another noise and experienced a different sensation.  It was the sound of my ego saying that I’m not good enough and that the implementation is too much work.  It was as if someone had flushed and the water pressure in my shower disappeared.  The exhilaration from a few minutes earlier was gone.

I realized that the shower may not be where we’re most vulnerable after all.  It’s when we step out of the shower and then, fully dressed, we pursue our brilliant ideas and our outrageous dreams.  Because when we step out,  we hear that we can’t do it.  We feel the steady stream of negativity.  And that’s when we need block out the disturbing and distracting sounds that are all around us and step back into the warm comforting shower of encouragement.

Doing things well means not giving in to the limitations set by others.  So when it comes to pursuing excellence, lather yourself with the sound of possibility instead.  Then, rinse and repeat.